Since 2010, some major monographic exhibitions have brought together many of Ugo La Pietra’s works from over 50 years of artistic enquiry.
His research has always centred on the urban environment, and his works and exhibitions continue to illuminate the dynamics between a city and its inhabitants. 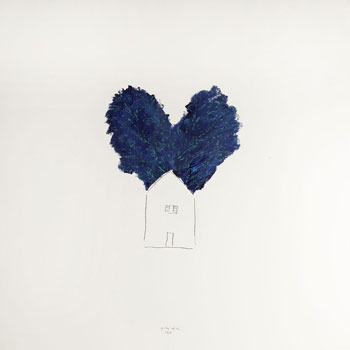 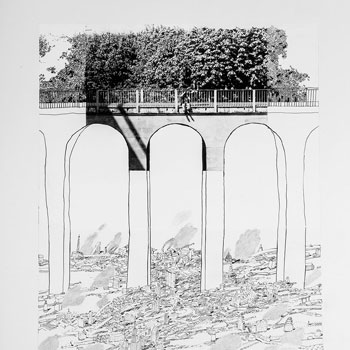 Urban planning, which he has explored since the 1970s in his La città scorre ai miei piedi works, recurs in this decade too, with a new cycle of works and exhibitions.
Ever a sharp observer of the city of Milan, La Pietra has created a series of works entitled La città senza morale. He uses photos, collages and inscriptions to spotlight the city’s contradictions, with themes such as new architecture’s relationship to old, the erosion of urban character by rampant commercialism, and activities where the citizen’s creative input is entirely absent.
“(…) and so La Pietra reveals the transformation and conservation of cities and of the territory through the means he knows best – painting and ceramics today, photography, photomontage, and video thirty/forty years ago – and in the way that he holds to be most efficacious for the public’s view, with the ideas that intimately push him in this direction. (…) Today this freedom, La Pietra seems to tell us, should be cultivated, no longer with an open battle between individuals and an overarching institution – the city -, but by allowing a flow of sensations to run over us, and by feeling a part of that flow. However, because cities still run beneath our feet – we observers, we who can see, we know-alls – it is necessary to perceive this flow that is increasingly directionless, ever larger and circular, ever more pervasive. (…)
No direction then: only perception; but perception with an awareness that today can be reached only through apparent levity, through an irony able to appreciate the comic within the tragic: that ability to overlook a way of planning that has by now been left to itself or allowed to disappear into – or to camouflage itself or hide itself in – vagueness. Perhaps, if in the 1960s privileged observers stood outside the flow – the city runs beneath my feet, but this happens just because I am standing still – today they must be inside the flow: I flow in the city.

The interest in “urban green” themes, a subject close to city dwellers’ hearts nowadays, has led architects and town planners to design architecture with natural elements added in, at the expense of proper green urban design.

La Pietra takes a stance on that planning approach with a cycle of works called Green works it out, where he shows how green elements are only an accessory to the built environment.